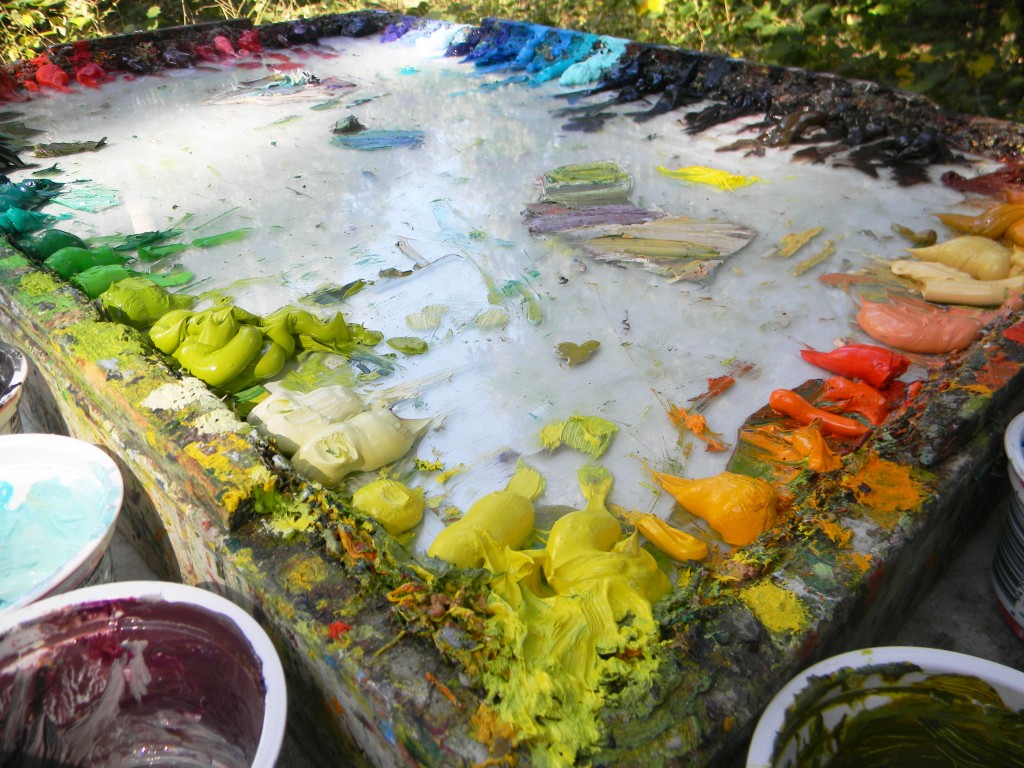 -Working in and with nature, I often think about what Thoreau said: “You must live in the present, launch yourself on every wave, find your eternity in each moment.”  There is a similar imperative and urgency about my paintings. There is a strong sense in my works that nature is intoxicatingly near and yet unreachable… just out of one’s grasp. Nature won’t settle down, be passive, or ever fully reveal itself. But, at the same time, it will offer us more than we seek. I can only hope my paintings can do the same.

As an on-site painter, place is integral to both my subject and process. I make large, often multiple panel on-site oil painting installations of dense landscapes that overwhelm the viewer’s perceptual senses. Each individual painting is created over the course of the day in an intense, wet-on-wet cumulative manner that underscores the complex nature of trying to capture the multidimensional and ever-changing experience of being in that specific location over time.

Formally the works are about the materiality of the paint and the physicality of the painting process in which the figure and the ground are actively exchanging places. This highlights the contrast and interplay between the illusionist possibilities of painting and its true abstract and material nature while also alluding to the active, perceptual experience one has when negotiating actual 3-D spaces. From a distance, I draw the viewer into what is first perceived as a dense but conventional space. Up close, however, the images break down; the lush, gestural paint marks, squeezed-out paint patches and areas of raw canvas help, instead, to reinforce the 2-D character of abstract painting as both an activity and an end-product. Ultimately my “all-day” plein-air paintings have become documents of a real-time process: the accumulation of fleeting moments, the experience of the day.

On a more personal level, I have realized that all of the on-site works I’ve made in the US have, at their core, been about trying to negotiate the complex propositions of sense of place and belonging which so influence the construction of personal identity. I am drawn to wilderness out of a deep psychological need to connect. In America, I am uninterested in conventional vistas,and it is in seemingly unclaimed or raw, dense natural spaces that I feel the most at home, where I am temporarily invited yet never fully allowed to enter.

I believe this comfort with, and parallel aesthetic attraction to, complex spaces comes from my background as a Cuban refugee.  As a first generation immigrant, I had to be open to seeing things from at least two culturally distinct, and often opposing, perspectives. Unsurprisingly, these identity struggles are common themes in Latin American art of the last few decades, in which the postmodern Latin American subject is fragmented and fluid, with multiple unresolved and at times contradictory identities. It turns out my creative work, like my life, has always been about improvisation and reconciliation.

Like my Cuban-American identity, my work can be broken down into two distinct but interrelated categories: the American-made works (30 year’s-worth) and the very new and developing Cuban-made/inspired works that explore the idea of a hyphenated-nature and offer a more conceptual approach in reconciling my Cuban and American pictorial and personal identities. You can see some examples under the PAINTING SERIES tabs “Hecho Con Cuba” and “Hecho En Cuba” on my website and read more about about them by touching this link

Cumulative Nature and Hyperbolic Nature series are two major, ongoing bodies of American-made works which are done, on-site, at various locations across the country. These series represent the first groups of large-scale paintings that I produced over the course of the entire day, in a wet-on-wet, cumulative painting manner rather than over multiple half-day sessions as I had been doing before. This seemingly subtle shift was the result of my desiring more, rather than less, change in light and colors on my subject and thus placing more of an emphasis on the “performative” nature of my on-site painting practice. I find the passing of time and the changing of light to be essential and welcome elements in the creation of my works. While painting, I continuously focus in and out at various depths. As the light changes over time, different features become highlighted, come to my attention, and are recorded on the canvas. This method achieves an expanded sense of space and time in my work by evoking more than is naturally seen at a single glance. Since I am integrating many moments, my process is more like that of an actor who knows her characters (color/space/shape) and script (changing light) and uses each performance to discover another nuance.

In a virtualized world, one could consider perceptual plein-air painting to be an act of defiance. As passé as it may seem to some, my current postmodern plein-air painting practice is both relevant and potent to me. I believe that the very act of making and viewing perceptually based, plein-air painting invites discourse on our own ability to have a meaningful, even sublime experience of nature today.